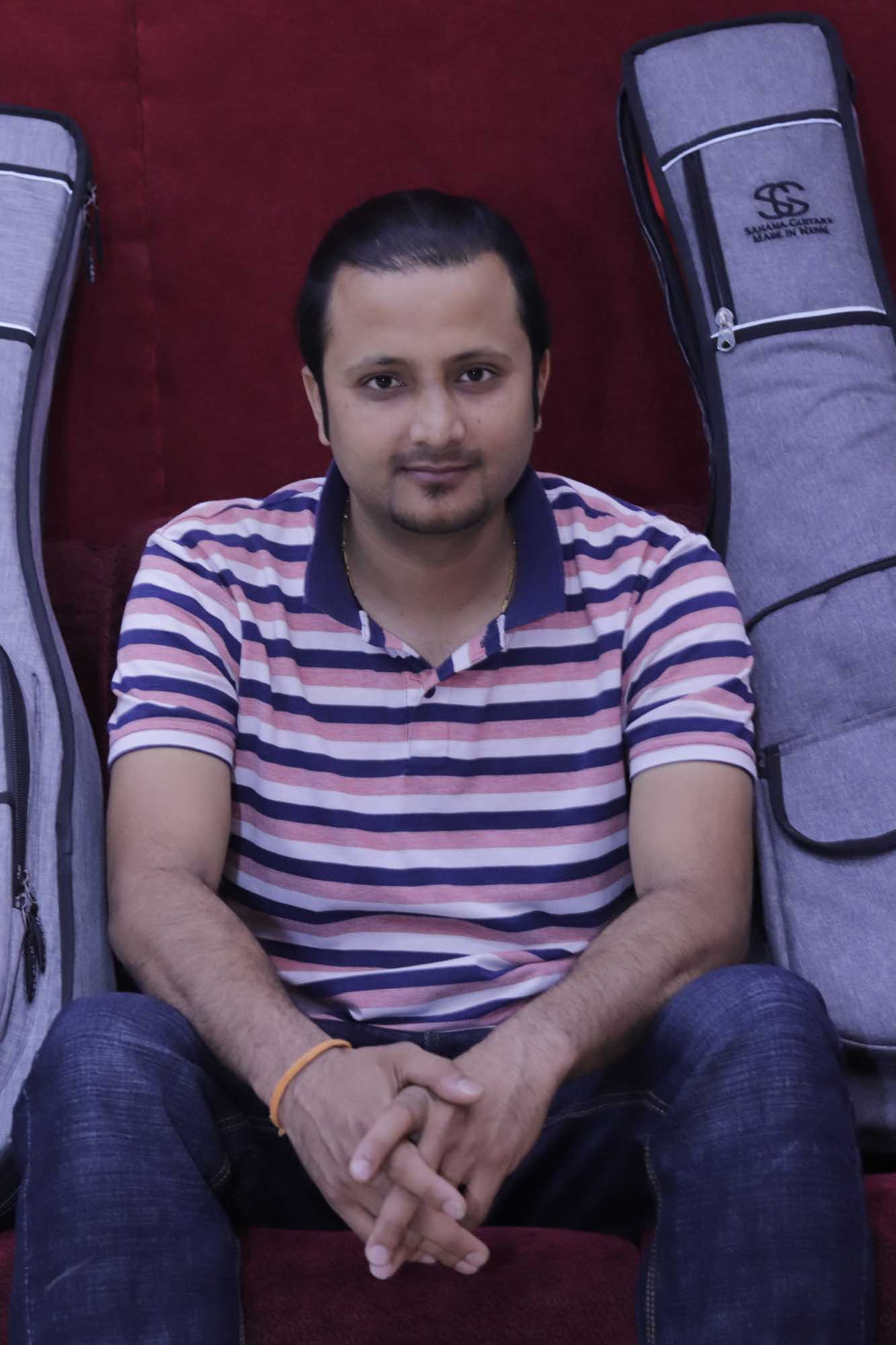 Sagun Bhattarai is the founder and a chief Luthier at Sahana Guitars. He completed his intermediate level (plus two educations) in science and attained the rest of his education Chartered Accountant( ACCA) from the UK. As he had always been ardent about manufactory, he decided to return back to Nepal. After his arrival back home, he professionally engaged in the finance and banking sector. Eventually he grew disappointed with his customary corporate job and decided to quit it. He had two distinct ideas regarding his future venture and/or investment. The former idea was to dive into the solar panel business which he very soon deemed to be less impactful and resounding to him. He realized that solar panels are linked directly to the government and policy makers, distributors as a prerequisite for development so it wouldn’t stand out as a firm contribution. He then dropped the idea. His latter idea lied in the guitar industry which he also happened to be very passionate about. He understood how much detail and precision mattered in terms of guitars so when he came to a finding that good quality of guitars was not available in the local market and since Nepal is rich in high quality woods as raw materials. He started to bring parts and developed his own machines for wood working from 2012. Mr. Bhattarai also studied about woods and learned that the woods available in Nepal are indeed of very good quality. Hence, high quality woods that were not valued traditionally were used as a raw material for manufacturing guitars. This knowledge was a landmark achievement. Later, with the help of internet and Luthier Books, a total of twenty two guitars were made in the first batch which included Les Paul and PRS inspired guitars. 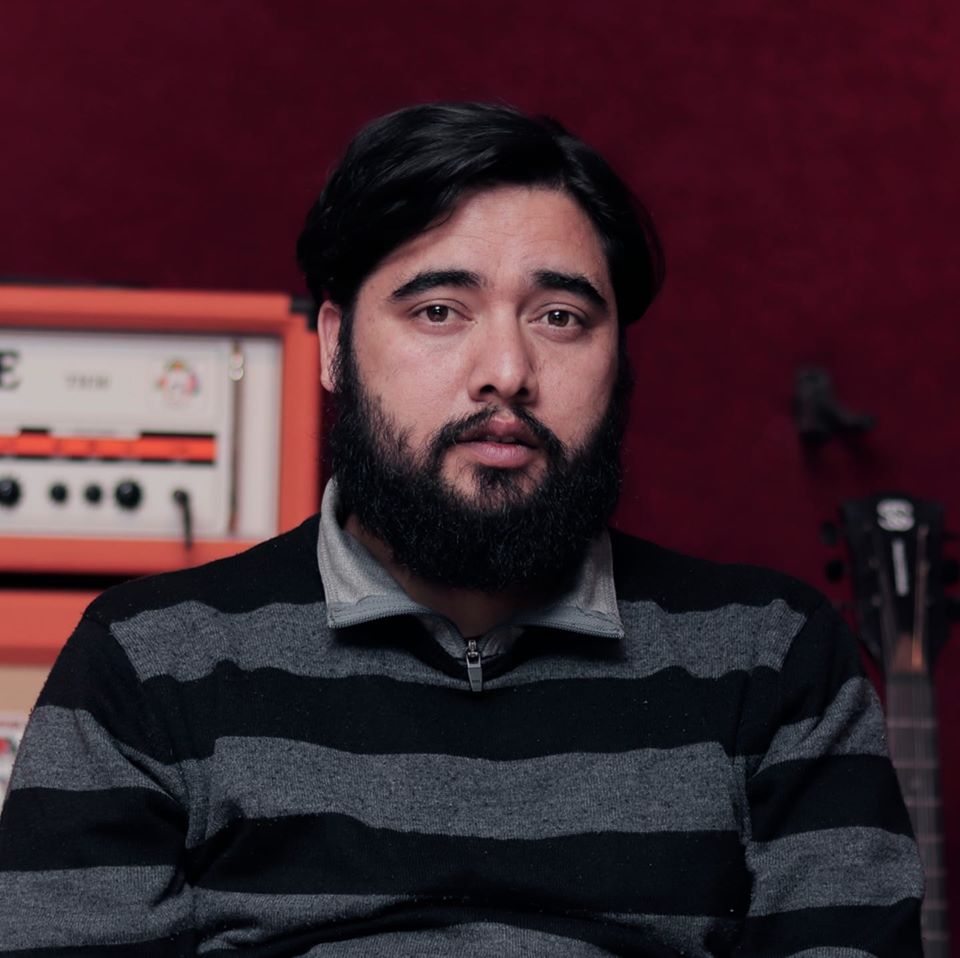 Apurwa Rayamajhi then joined the founder. Academically, he was from travel and tourism trades’ background. Mr. Rayamajhi interned as well as worked his first job on an airlines company. He had worked with Yeti Airlines, Qatar Airways and also had his own tour company with few other people. Rayamajhi had good idea about what Mr. Sagun was taking on at. These two men were pals and Rayamajhi was also a guitarist. As a passionate musician he immediately recognized the impeccable quality of the guitars and hence, he was soon a part of the team. This is how the Sahana Guitars journey started. For each batch, Sagun was the manufacturer whereas Apurwa studied the market, looked for feedbacks and made sure the quality was top notch. Everyday struggling musicians needed a guitar that is dependable. Sahana Guitars then studied about what kind of guitars that served the purposes of the struggling artists and came out with their first original craft “Nyauli”. It was the most economical, versatile instrument for the targeted musicians. It was a huge success. The team then started to take notes on how PRS and LP style guitars could be made even better and what aspects of their work needed improvisations and how it could be done. They gradually started to research on FB, started taking feedbacks and opinions from people. They then came up with two new original designs “Lampucchre” and “Danphe”. Both members of the duo decided that as they were both working for the marketing, sales and manufactures, they needed people for selling their product. For the new mission of expanding their horizons, they approached people from the music field regarding distribution but everyone wanted a whooping 30-35% commission in credit for the sale of the guitars. This brought a big shock to the team to learn how music stores wanted such huge margin of profit. They had an option to bring up the prices of the guitars, which wouldn’t be a fair and moral thing to do but knowing someone else would make such big profit off of their hard works wasn’t an acceptable option either. So instead of approaching music stores and giving commissions, they agreed on opening their own store and selling their products in order to provide a fair deal to the struggling musicians. For the expansion of the project, it was realized that just the two of them weren’t enough so they decided that they needed two more versatile individuals as an addition to the team. Very fortunately, Shirshak Subedi and Apurva Chaudhary became part of the Sahana Guitars team. The four wheels of the carriage, the four horsemen of the team, started their journey together.

With the social media platform that we have today, Sahana Guitars has established itself as a very qualitative and renowned Guitar manufacturer and provider in the country. The biggest goal of Sahana Guitars as of today is to expand their horizons to the international scene, competing with the best brands and catering to a wider range of customers. 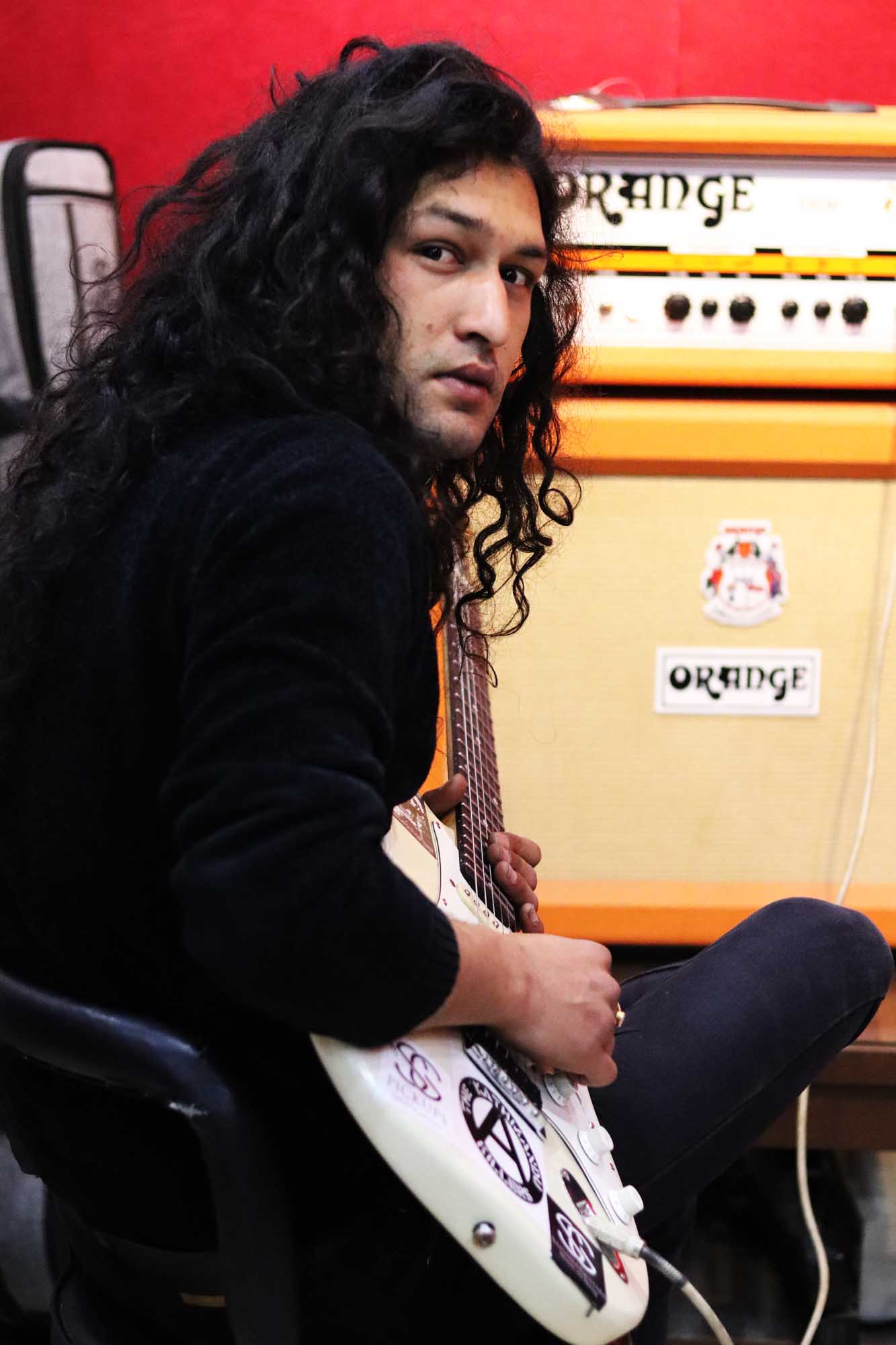 Shirshak Subedi
Shirshak Subedi was naturally a music enthusiast. He was fond of singing and of instruments. Although he had initially joined and graduated his intermediate level in computer science, he later went on to join a music school, following his passion. As an offspring belonging to an army family, he didn’t find the acceptance and encouragement he was seeking for. He was struck by a realization that his dream and the dream his parents had webbed for him didn’t overlap. Considering his family’s hopes and priorities, he decided it would be best of him to find a corporate job. But as his passion lied somewhere else, he had communicated with a friend of his, Roshan Maharjan, to connect to him if there ever was a possibility, a worthy opportunity for him in the music biz. After a year and half, Maharjan called him and told him that Sahana Guitars needed an employee in their store. This became the turning point of his life. He finally met Mr. Rayamajhi, through Maharjan, the marketing representative and was interviewed by him. He was deemed eligible to join the Sahana Guitars team, so he eventually did. He joined the venture as a person handling stores and worked in a store for 7 months. As Sahana Guitars had already established its brand and goodwill on the market, they needed another team member, more sophisticated instruments to meet the demand of their increasing customers. When he was reconnected to the guitars, it made him nostalgic to his past and he relieved it. He then started working as a luthier. After his constant encounter with his beloved instrument, he developed a hunger to manufacture them as well. He enjoys his work and in fact, is enamored with it. Mr. Subedi says, “I am always inspired by the words of Apurwadai, and work of Sagun Dai which helps me to keep myself motivated to work in hardships.” He is associated to Sahana Guitars since last 3 years and as his passion lies in music and woodcrafts, he wants to enhance his skills and knowledge for the same and has keen interest and desire to work even better than this to reach the goal Sahana Guitars has envisioned. 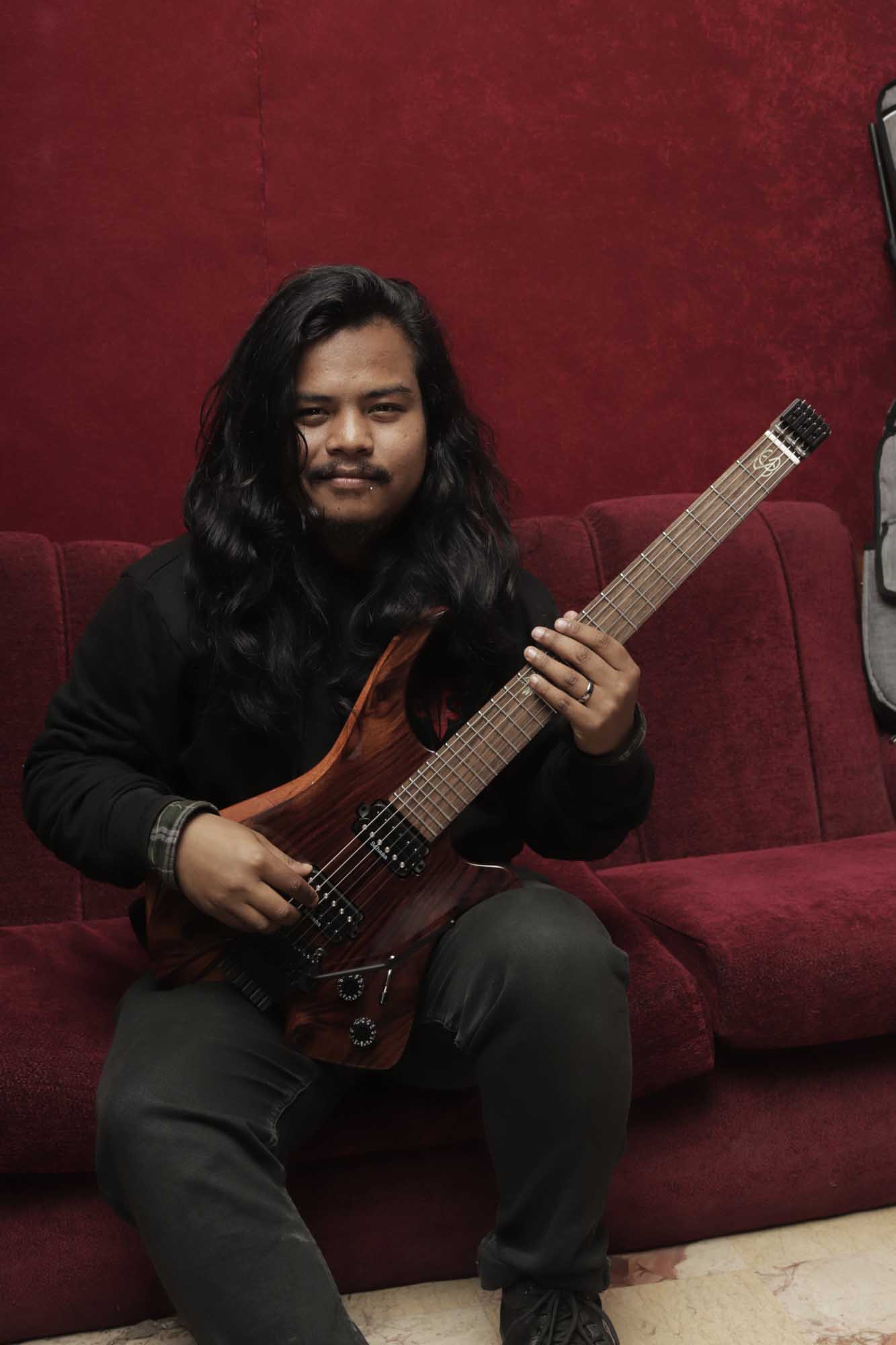 Apurva Chaudhary was professionally involved in marketing. He is a BBS graduate from KIST College. He used to play guitar by himself at his home and once he faced an incident where his friend burrowed his instrument and never returned it. After he lost his belonging, he was on a hunt to buy a new one, a brand new guitar, and in the same pursuit he came to meet Mr. Rayamajhi. Apurva had recently quit his job because of his health issues and that’s when Mr. Rayamajhi reached out to him with a job offer. He then joined the Sahana Guitars team and has been working for the past three years in handling customers as well as marketing. Despite his position now, however, he had originally joined as a promoting musician to grow himself via the Sahana Guitars market. He also worked ardently in collecting and/or reviewing feedback, circulating it with the rest of the team so that the overall quality of the brand enhanced. He is responsible for disseminating videos developed by Sahana Guitars which has become a great success in social media via official facebook and Youtube page of Sahana Guitars Crafted In Nepal. He plays a key role in store and manages costumers to reach the contemporary demand of emerging and established musicians. As per Mr. Chaudhary, he takes Sahana Guitars as a platform to get connected with every type of musicians who plays every genre of music which helps him to learn new techniques and grow himself as a musician. He envisions himself as all rounder guitarists in his future promoting Sahana Guitars. 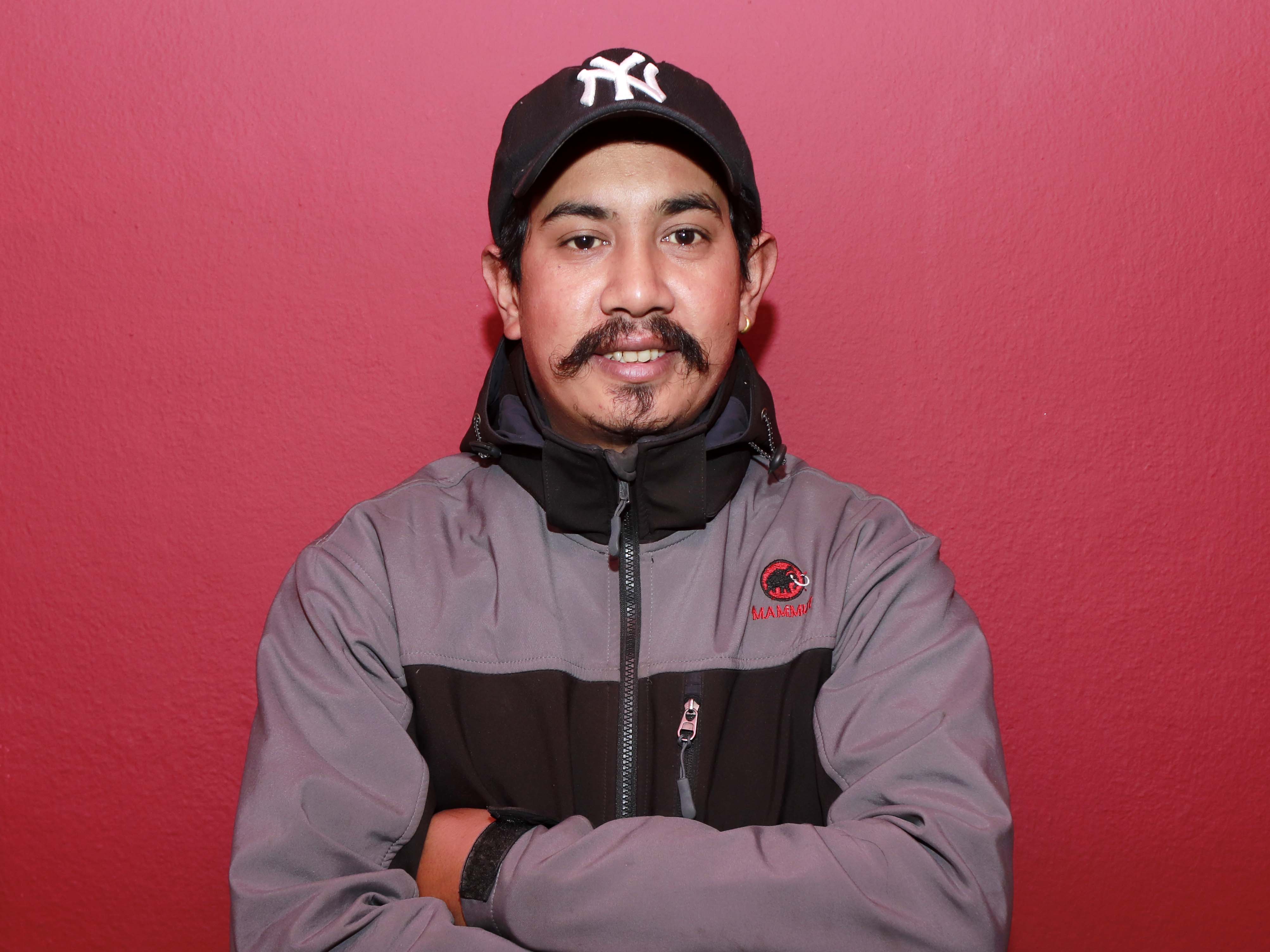 Kedar Achhami, is a young entrepreneur who from Dhulikhel came into Kathmandu Valley for Education and had to work also to sustain himself and his education.

About 17 years ago, he started to work in a bag factory as helper. Slowly he started learning the different techniques and skills required to build different type of bags. He worked in the same profession for about 5 years and then finally decided to start independently. It was not easy for a young person with little investment to find good trading partners who could supply quality materials. Also it was very difficult for him to find business if any. It was a tough time for Kedar. He started with one machine and himself, which he believes was a good move as it taught him a lot of other aspects of bag building. He also got freedom to think of his own designs and ideas that he could implement on his bags. That set him apart from other small builders. He slowly but steadily grew his business with patience and also with time brought more machines and team members to help him in his work.

During this phase, he got introduced to team Sahana where we as a company were looking for someone who could build a bag that was in our mind. The “Uniform” series of bags are the result of what we needed and what Kedar could deliver.

Kedar is an integrate part of Sahana Guitars and will be with us forever.